Honoring the Life and Inspiration of Nelson Mandela; Continuing the Legacy against White Supremist Domination 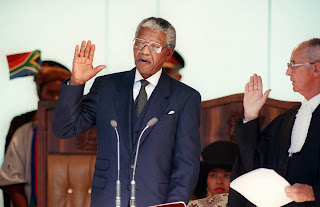 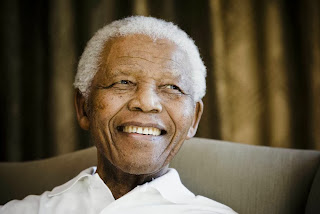 "I have fought against white domination, and I have fought against black domination. I have cherished the ideal of a democratic and free society in which all persons will live together in harmony with equal opportunities. It is an ideal which I hope to live for, and to see realised. But my Lord, if needs be, it is an ideal for which I am prepared to die."
Nelson Mandela, defence statement during the Rivonia Trial, 1964. Also repeated during the closing of his speech delivered in Cape Town on the day he was released from prison 27 years later, on 11 February 1990.

"We are not anti-white, we are against white supremacy … we have condemned racialism no matter by whom it is professed."
Nelson Mandela, defence statement during the Treason Trial, 1961.

A global player
In his inauguration speech in 1994, Mandela heralded the country’s re-entry onto the world stage, saying it should become “a rainbow nation” that would never again be seen as “the skunk of the world.”

He said: “We enter into a covenant that we shall build a society in which all South Africans, both black and white, will be able to walk tall, without any fear in their hearts, assured of their inalienable right to human dignity - a rainbow nation at peace with itself and the world.”

Peace and forgiveness
Mandela’s biggest influence on the new South Africa was his personal determination that anger over the crimes of the past, including his 27 years as a political prisoner, should not motivate future laws and actions. Key to this was his 1995 establishment of a Truth and Reconciliation Commission that investigated historic human rights violations and gave vent to grievances.

My Personal Condolences and American Call To Action

It is with a regrettable ignorance that at the time of his passing, I learn the most I have ever known about Madiba - Nelson Mandela. He was an oh so conscious spirit, living his human experience very OUT LOUD. I wish I would have been more alert and aware of his powerful life's work and planetary impact during his life. It is because of this however, that I now endeavor myself to bring about this same measurement of advancement to the deprivated black population here in America. May we finally hold our media accountable for the slander and degrading of our black image; may we finally hold accountable the recording giants for the degrading and toxic messaging being transmitted to our young impressionable minds; may we hold accountable racist public servants in government that hold black progress, self determination and DIGNITY hostage to cronyism, nepotism and socially engineered underachievement and denial of access to public and private resources and opportunities.

He stands as an even TALLER PIONEER in his death, than in this life, for now his LEGACY will live on forever in the annals of OURstory (history). I love honor and respect Nelson Mandela for raising his voice so eloquently, for the advancement of a just and righteous racially harmonious co-existence of man and mankind here on Earth. Godspeed Nelson Mandela, for not only will I miss you in death, but I will also miss not having known you better in life...

...may we all now take up the torch of RECONCILIATION between races here in America, make light and bring to an end the systemic grip that RACISM and the ECONOMIC INJUSTICE that it breeds, has on Black America after the stain that SLAVERY has left on our collective souls and MINDS. Let us commit ourselves to mental health de-stigmatisation and treatment, as well as the necessary economic opportunity and advancement of a people too long depraived of their just due. - Selah.

Posted by Reesie The Realest at 1:37 PM No comments:

CAPITALIZE on What LIES in Your Debt! FIGHT BACK and GET PAID!

Power Your Own Property! GET OFF THE GRID!

HARNESS THE POWER OF YOUR SUPERMIND!! RE-PROGRAM YOURSELF & YOUR LIFE!

HEIRLOOM-SEEDS WORTH MORE THAN GOLD!